What strikes me the most is the professional attitude of such young kids. They already are champions, some may be future football stars, one of those earning in a career the equivalent of several €uromillion jackpots. I remember playing football games in primary school. We were all running after the ball. The goal was to get it and shoot no matter what. When you succeeded in having it, the challenge was above all not to lose it, not to pass it on to teammates, who anyway were trying to pinch it from you whether you wanted it or not… Not the best team spirit!

My football career stopped abruptly at the doorstep of high school. In the Eighties, there was neither a football option in PE, nor a girls’ football club that I could go to after school. It simply did not exist. To the dismay of the girls in my family, especially my cousin raised on En Avant de Guingamp football games! Girls could choose between dance, gymnastics, at a push tennis. At that time, we thought it was unfair, but normal… Unfairness was normal…

Mentalities evolve very slowly. Nowadays, girls playing football are not longer called tomboys. They simply are passionate girls who practice both a physical and tactical sport. They free themselves from the sexist prejudices around football. Good job girls! 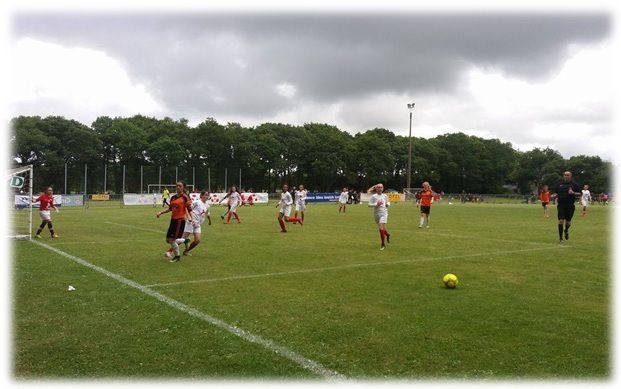 In any case, I enJOYed watching these future champions playing in Dirinon. I gave them huge rounds of applause, as if I were encouraging my sister, my cousin, all my primary school girl friends who would have loved to play football, but could not... Because it was inappropriate… Yes, you can totally say it: Fu#C$k!N*g Discrimination!

I might be a little too optimistic about the equality between women and men. On the Dirinon Tournament website, you will find the photos of this year U11 and U13 podiums, except for the U13 - Women... Buh! Similarly, in the paper brochure, the history prize list of the tournament is presented on page 11, but no mention of the girls' results. Re-buh... After l’Olympique Lyonnais in 2016, girl football players from FC Lorient won the trophy of this (already!) 23rd edition.

The Dirinon International Tournament welcomes 1,200 young people from all over the world. 15 countries are represented: from the Philippines to Estonia, from Brazil to Canada ... There are also 450 volunteers and 150 sponsors. This represents a big organization that has seriously "professionalized" over the years. 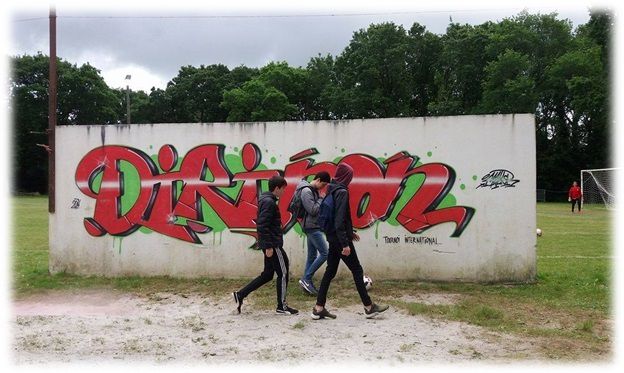 Thumbs up regarding their waste reduction and drinking water management, including the banning of plastic water bottles and the rehabilitation of tap water and sports bottles. The planet and all the eco-walkers of the territory THANK YOU.

See you next year!

The first time I saw the logo of The CiMeNTeRiE, Landerneau new sports hall, I read The CeMeTeRy (Cimetière in French)...... I found that the name given to the place was rather inappropriate unless coming from a person who hates sports and has a weird sense of humor. In fact, the hall was built on the site of an old ... cement factory (Cimenterie in French). Which makes more sense! The LBB are the most popular sports team in Landerneau and is the leading basketball team representing Brittany at a national level. If you ever visit the city and there is a basketball game that night, don’t miss it! You will shout and clap a lot, see the Whaou-giraffe-mascot and the “petit poulet” (small chicken) throwing packed chocolate crêpes to the public. The “Crêpes Whaou” company is a famous industrial crêpes maker which plant and headquarters are located in Plouédern, only 10 minutes away by car from Landerneau city center. A friend of mine, racing commissioner in charge of ensuring the regularity of the horse races and the application of the «horse race code», has invited me to discover the beautiful grassy racecourse tracks of L’Hippodrome de Landivisiau at Croas-al-Leuriou.

I had the opportunity when I was 20 years old to go with my uncle François and my auntie Martine (Thank you Family!!) to the famous horse racing in Deauville. I have fond memories of this time, and going to Landivisiau delights me. · There is a formal dress-code.

NO!  Come as you are... You don’t need to wear any Haute Couture or have binoculars to be allowed inside the hippodrome in Landivisiau. You’ll find the greatest racecourses’ atmosphere without the «stiltedness» as a bonus.

NO! No need to pay large amounts of money to bet. With 2 euros, you can bet on your favorite horse.

· You need to be a professional bettor.

NO! Just bet on the horse name or number you like and that works! ELAN DES ILES, DEDE DU SURF, DIVINE DE SASSY, CALIN D’AVAROCHE or SITUPASSABRION.

My personal method at betting:

I grab the free program given at the entrance and then look for the names of the horses that performed well over the last races. I pick a horse… but never a «favourite» one. I bet on « placé – gagnant », meaning that if my horse arrives first, I win. If it arrives second or third, I also win!

Anyway, I am not pretending to be an expert… Far from it! But I surely am an expert in having fun at horse races! If you don’t feel like gambling. No worries: It’s always enjoyable to observe the equines trotting, galloping on flat tracks or jumping obstacles… Pure moment of grace. So much beauty and elegance in one sunny afternoon……….. This reminds me of my grandfather who used to sing me this French popular nursery rhyme: